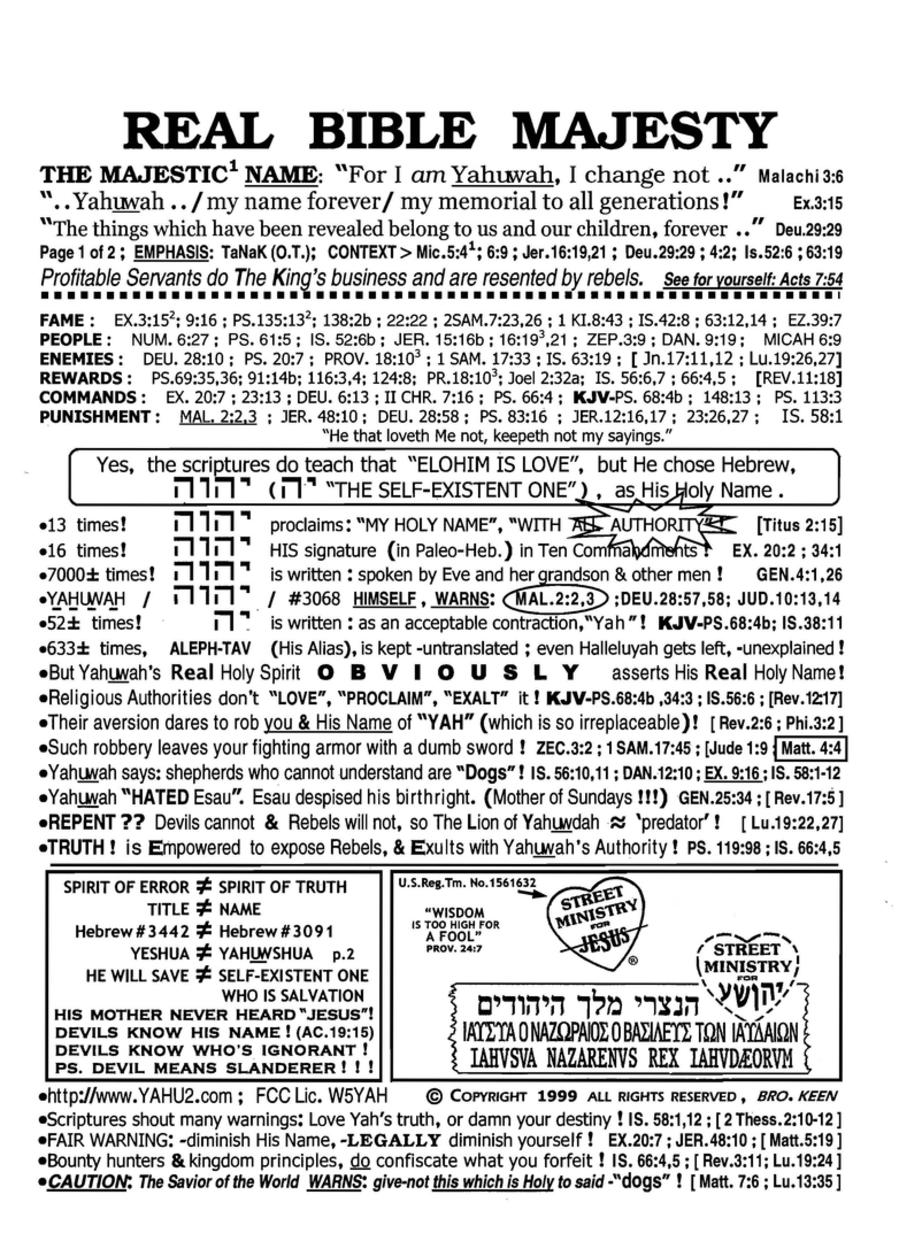 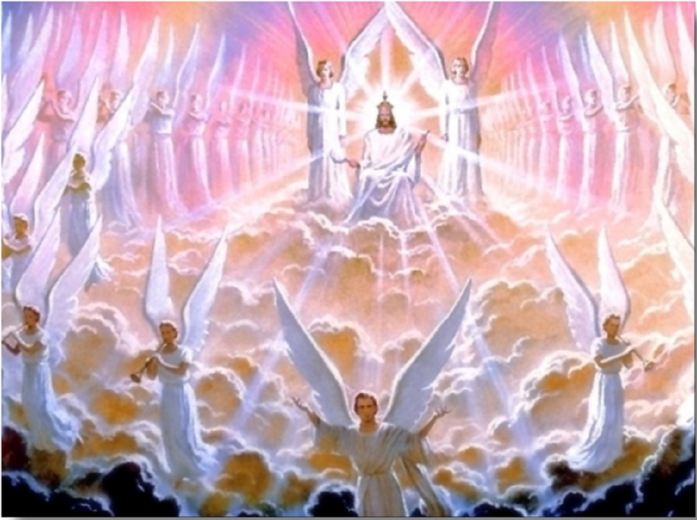 Nazarene Israelites are the "very elect"..
(i.e. Messianics) and love YaHUaH's Name.
We, "Very Elect" are also meek (per James 1:21),
therefore able to "receive" the TRUE name of Messiah.
We "Very Elect" defend both YaHUaH's Name & Calendar.
Hordes of small accusers disregard  James 4:8a or Prov.10:7b !
Media hosts & guests LIE by saying we favor "Scriptural Judaism".
Dullards need to hear that again, so pardon the repeat.
Media hosts & guests LIE by saying we integrate "Scriptural Judaism".
"Scriptural Judaism" is an oxymoron & heresy to us "Scriptural YaHUDIM",
(Remember,  Judaism is depending on Talmud, Zohar & Kabbalah instead of
the "New Covenant" mentioned in Jer.31:31 and Daniel 9:27.   [Ps. NEW =H#2319]
( No, we didn't make a mistake in Daniel.  If you don't want to know, please don't ask.)
Scripture says, "Come, let us reason together . . . ."  !   So, here we are !  Where are you ?

Scripture even contains instructions on 23 different ways to magnify His Name.

We saints received power in Jerusalem on day No.50, called Feast of Weeks.

(Sunday-Keepers crave the power of Feast of Weeks, yet refuse to count to fifty.)

Churchianity does not want His Calendar or Name. Churchianity sits deceived The "Very Elect" "draw nigh unto Elohim"; wolves & dogs howl & growl about it.

The "Very Elect" are humble and perpetually thank teachers who told YaH's Name.

for themselves by secretly eroding your rights.

Hear the word of YaHUaH, ye that tremble at his word;
Your brethren that hated you, that cast you out for my name’s sake,
said, "Let THE LORD be glorified" :
but He shall appear to your joy,
and they shall be ashamed.
Is.66:5
"When He, the Spirit of Truth, is come, He will guide you into   all truth: "  Jn.16:13

"Also the sons of the stranger,
that join themselves to YaHUaH,
to serve him, and to love the name of YaHUaH, to be his servants,
every one that keepeth the sabbath from polluting it,
and taketh hold of my covenant; . . . . ."   Isaiah 56:6


1Cor.2:14
Scriptures indicate your probability of disinterest,
but seekers like Acts 15:17-21 are grateful.
John 17:11,12a
Scripture teaches: we profit one way if you desire this, and if not, we profit a different way !
We bring you the true names of Elohim Almighty and of His Son, (and of your predator).
If you do not desire it, it becomes a warning ; if you do, it is wonderful scriptural truth.
"My Holy Name" is like "food" for His sheep, Jn.21:17. But it's not endearing to a goat.
There has never been a sensible Scriptural Disproof of "YaHUaH" from any challenger !
Our "Theologians" who consented to critique this for errors, finally just “gave-up" !!!  :-))
If you disagree with this, the burden of proof shifts to YOU, to prove His true name.
"There is . . now no condemnation to them which are in . .YaHUShuA . ." Rom.8:1
But a stubborn preference for a meaningless alias, has consequences.  Matt.25:28
This is not to pursuade your mind but to help the Holy Spirit appeal to your spirit.
Martin Luther saw & declared the Bible Way of Salvation and started a revolution.
We here see & declare the - True Names of Elohim - and also start a revolution.
"My Holy Name" is such great Truth that unrepentance about it is great offense.
Visitors, students, commenters indicate these teachings of His Name are true.
Feel free to discern whether this is "an accuser of the brethren" or Titus 2:15
Be careful.  Slander sows discord and makes you an abomination !!  Pr.6:19
Our offset format is to help "this hidden truth" be easier to Read & Discern.
Truth here is especially for you visitors who inherited lies !!  Jer.16:19 - 21
Evidently, we are chosen, to restore and declare YaH's Name.  Matt.20:16
His Word is a "hammer" Jer.23:29 ! He "hammers" His Name 7000 times.
Working as our "Brother's Keeper" , - yes we do "hammer" for His Name.
Worldwide-avoidance leaves only a few of us to "bravely" declare "YaH" !
We would rather be discussing affections than these warnings. Promise.
We tell you more "for free" than the plagiarists of us tell you for $$$ !
But be smart !   Copy & keep this before we cannot afford to publish.
You LukeWarm are no match for spirit-filled defenders of His Name ,
in either desire-for-truth or brotherly-love !   We exult in His Truth.
Opinionated bullies abound, yet possess less proof than "YaH" !
[As Messiah's Ambassadors (2Cor.5:20) we hereby convey
His "hot displeasure" that His Name is diminished.]
So pursue all this truth with "hunger & thirst",
(not with some mere reluctant agreement)
and with real brotherly love and obedience.
||Ex.12:2|||||1 John 4:1|||||Ex.3:15||
Perverted Scriptures and their Hirelings, will hurt you.
YaHUaH asserts His Name like a decisive test for Hirelings !
"Here we stand.  We can do no other.  Elohim help us !  Amen."
Unrepentant goats decline His Name as fast as He can offer it. Acts 4:17
Scripture does say to get their blood off our hands, -by warnings. Ez.3:18,19
Because Elohim requires "Spirit & Truth"!, we bring you priceless "Spirit & Truth".
Rebels avoid Scripture like Hirelings avoid 1Kgs.19:11 (which declares His Name five times)
"-but those things which are revealed belong unto us and to our children for ever-" Deu.29:29b

Twelve times or more,
YaHUaH said, "My Holy Name".
In Ex.34:6 He declared His own Name with Joy & Exuberance !!
(Yet you or a billion others "couldn't care less" !)

Disobedient Religious Authorities
is an odd term but it is easy to prove.
Scientific "proof" requires evidence that is
observable and verifiable and repeatable.
Well, here is your proof for that term.
Disobedient Religious Authorities
would rather have His sheep of His flock
to be dumb, unprotected, and more susceptible
to devil possession than to teach "My Holy Name".
But we preach "My Holy Name"
and we infer that Rev.3:11 plans to
transfer crowns
from the less-obedient to the more-obedient.

They could have told you what I am left to tell you.
During Water Baptism and other occasions they say,
"In the Name of the Father, the Son and the Holy Spirit."
Worldwide, millions and millions of times they have said that.
So I would ask them, "What is that Name (singular, not plural) ? "
FYI, there is such a Name and some Seminary-Judas should have told you !
It is "Yah" !, as in Hallelu-YAH, and means "The Self-Existent One".
Their problem is that if they exalted His Name
they would have to share their pulpit with Him.
Pulpit rascals did begin using it to be trendy,
but don't admit to any shame or guilt.


Disobedient Religious Authorities
is an odd term but it is easy to prove.
Scientific "proof" requires evidence that is
observable and verifiable and repeatable.
Well, here is some proof for that term.
Disobedient Religious Authorities
provably prefer to have a president who is
pro-abortion, pro-homo, against Defense of Marriage,
Koran-observant, Shariah-advocate, Allah-worshipping
more than obey 2Chr.7:14, and be called YaHUDIM !
[[ The sly do slip by, unnoticed ! ]]

Looking back, it is a grief to see how we poured out love & gifts
to certain Religious Authorities for years
but when we finally learned YaHUaH's Name and told them,
their friendliness changed to 'virtually estranged',
and we lost those "investments" in them.
That loss & grief did explain & confirm Matt.7:6a !
Woe unto you who obstructed the intent of  John 17:26  &  Mark 16:17b.