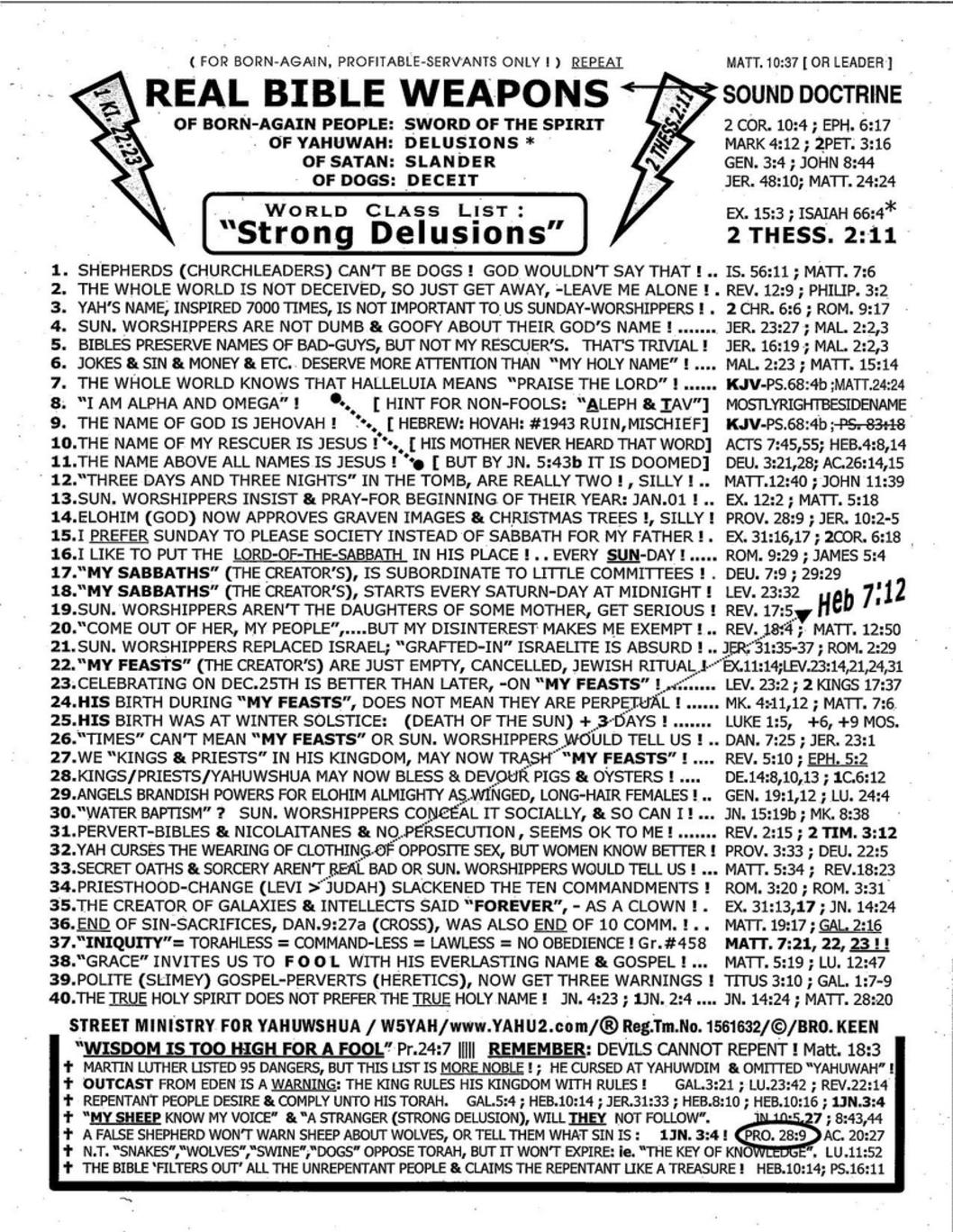 Flaming swords at the Gate of Eden protect it !
Some info here is Introductory & Preparation.
Then we offer Hebrew proofs about His Name.
The long Introductory Preparation is worded
(seeded) with our affronts & HIS threats and
does separate the proud from the humble.
Reprobates have already been discarded
and just left alone & unable to repent.
(At least three sins are unforgivable.)

YaHUShuA will personally
use you for vomit (Greek #1692) if
you are lukewarm about His Truth ! Rev.3:16
Truth is Exempt and Exults in the joy of authority.
Please write & say if you heard & obeyed the Holy Spirit !
That's when our joy happens and all our costs feel repaid.

EVEN AFTER CENTURIES OF BEING DUMBED-DOWN BY LATIN . . .

A WORD AGAINST THE HOLY SPIRIT IS NOT FORGIVEN IN THIS WORLD, NEITHER IN THE WORLD TO COME !
ELOHIM ALMIGHTY IS NOT TIMID ABOUT HIS INFINITE ENFORCEMENT; HIS HELL IS AS STRONG AS HIS LOVE.
HE TRIES TO WARN UNREPENTANT PEOPLE, AND IN SIX-CONSECUTIVE-SENTENCES HE REPEATS HELL FIRE !
YET 100,000-to-1,  BIBLE BASTARDS (HEB.12:8) STILL DON'T WANT HIS TRUE NAME OR TRUE DAY OF REST !
YET 100,000-to-1,  JOHN 3:19b MEANS YOU TRULY PREFER SHARIA GRIEF RATHER THAN READ THE "BIBLE" !
MOST CONVERTS WOULD RATHER ENDURE ANYTHING THAN SUBMIT-TO & LOVE & DEFEND HIS TRUE NAME !
LOVE IS VOLUNTARY.

YOUR RULING CLASS WANT TO RULE YOU (& CUNNING DEMONS) W/O USING YAHUSHUA'S NAME.  MK 16:17
YAHUSHUA BLASTED YOUR DISOBEDIENT RULERS WHO CHOOSE TRADITION INSTEAD OF TRUTH !  MK. 7:13
SPIRIT-FILLED BELIEVERS DO NOTICE ! , AND THEY SUSPECT ILLITERATE-LEADERSHIP OR SERIOUS-DECEIT !
STEPHEN WARNED HIS RULING CLASS, ACTS 7:51,54.   ENRAGED !!!, THEY CHEWED HIM WITH THEIR TEETH !
CHEWING RULERS HAD NO IDEA: ELOHIM'S REVENGE WITH HELL IS FAR MORE WARLIKE THAN THEIR TEETH !
YAH HAS A REAL, BIG SURPRISE ALL READY FOR DISOBEDIENT RULERS:  PRO.1:24-28 ; 2THESS. 2:10,11,12 !
Malachi 1:6 ". . where is my fear ?"  saith YaHUaH of hosts unto you, O priests, that despise my name.
THEY WON'T MISLEAD US MUCH LONGER !    THEY WILL REPENT,  OR ELSE !


Apostolic ≈ Original
Proverbs 14:12 (KJV)
There is a way which seemeth right unto a man,
but the end thereof are the ways of death.
- - - - - - - - -
"Sunday-keepers" (who demand their tradition)
are rebuked [or cursed] like those in Mk.7:9.
"Sunday-keepers" seriously don't care that
their tradition was started by Rome
then enforced by troops which
stalked & murdered the
Antioch type of
Christian.

Over a thousand years later
in Fox's Book of Martyrs
murder after murder
torture after torture
on
convert after convert,
continued by the
hundreds.

The Valley of Piedmont
in the extreme west of Italy
was the refuge of church people
who I call the Antioch type of Christian,
They're also called Apostolic or Sabbath-keepers.
Sunday-keepers don't seem to care if Sabbath-keepers
were hunted and killed, but Born-again people, will care.


On the venerable day of the Sun
let the magistrates and people residing in cities rest,
and let all workshops be closed.
In the country however persons engaged in agriculture
may freely and lawfully continue their pursuits
because it often happens that another day is not suitable
for grain-sowing or vine planting;
lest by neglecting the proper moment for such operations
the bounty of heaven should be lost.[33]- Sun God Worship
http://en.wikipedia.org/wiki/Sol_Invictus
See:  Constantine on coin with Roman Sun God.
http://amazingdiscoveries.org/AD-newsletter-fall-1998-Martyrs- -
- - - -


LATER . . . . .
But , when the civil power needed & joined with the church, in 538 AD
and Western Rome came under Papal rule,
the council of Orleans prohibited the country labor also.

Final Word
on this-

2 Peter 3:18 tells you to grow in knowledge.
If you don't want to grow, just go suck your thumb !
Pro-Sabbath scripture is so simple, that disinterest is serious.
Dozens & dozens & dozens of Scriptures say that Born Again people
are "IN Him", "IN Christ", "IN Whom", "IN the Beloved", "IN Christ", etc.
Junk traditions are dumb works that disregard or defy His Ten Commandments.
Your junk traditions will be burned-up like "wood, hay & stubble"   1 Cor. 3:12,15
If you submit to junk traditions,  don't complain about your real loss of authority !

Revelation 14:11,12 (KJV)
11And the smoke of their torment
ascendeth up for ever and ever:
and they have no rest day nor night,
who worship the beast and his image,
and whosoever receiveth the mark of his name.

12Here is the patience of the saints:
here are they that keep the commandments of God,
and the faith of Jesus.


Therefore,
the Mark of the Beast must be
some act or belief that violates
the "Commandments of God"
such as Sunday-Rest !!!

Bingo!
The mark of the beast is
first a mark on your spirit-component,
by consent, and on your body, second.
It is what you believe in your spirit
and act on that belief by what you do.
It may seem right, but leads to death.
Proverbs 16:25

The most obvious difference between
the groups of people is that
some REMEMBER
His Sabbath.

2 Thessalonians 3:6
Now we command you, brethren,
in the name of our Adonai YaHUShUA Messiah,
that ye withdraw yourselves from every brother
that walketh disorderly,
and not after the tradition which he received of us.
^ ^ ^

NOTE: One tradition exemplified by Paul was to "REMEMBER" the Sabbath.   OK ?
In the Book of Acts alone, Luke recorded that Paul honored it 84 (eighty four) times !!!

Here is a very astute insight, only for the wise.
In Jeremiah 31:31 - 34
YaHUaH Almighty Himself
said Born Again people will be
either JUDAH or ISRAEL, and
care about the Sabbath, and
know YaHUaH's real Name.
(Just too heavy for Dullards.)
Heb.8:7-11;
10:16