Some of you low-life, sassy punks will awake to  "shame and everlasting contempt".  Daniel 12:2

Poor & doomed: Prov. 1:26 ; Hosea 4:6b
wood & hay & stubble
You lewd "servants of Corruption" can see
YaHUShUA up on that cross,
suffering all day in your place,
and still desire to pervert
His Name & His Day of Rest.

Unrepentant :
Billions who fail to repent
for not Loving & Obeying
YaHUShUA

Paul said,
1 Cor. 2:2
For I determined
not to know any thing
among you, save
YaHUShUA Messiah, and him crucified.

Every few years I hear some famous preacher say that only a tenth of the churchpeople will be saved.
I heard that again last week when two highly respected or famous church leaders said it in a broadcast.
In fact, [now get this] one of them was told by The Savior Himself in a vision that only one-in-ten would be saved.


SCRIPTURE SAYS TO WITHHOLD A HOLY TRUTH FROM ONE SPECIFIC CLASS OF PEOPLE !!!!

"And this is the condemnation (damnation) :
- that light has come into the world,
and men loved darkness rather than light . . "   Jn. 3:19a

Abstract/Summary     - about His Name

Imitation names should be preferred only by imitation believers.

There is an important principle & practice which is honored
by men who examine details of the Scripture.
They give special value to the earliest appearance
of some idea or fact or word.
In this case "Joshua" appears first in Torah at Num.13:16 & Deu.3:21, as "YaH".
The weak substitute which is popular today appeared 1,000 yrs. later as "Ye".
The aforementioned principle & practice is additional deductive reasoning (proof)
that the "YaH" is preeminent in originality and authority.


F.Y.I.:  Both the Num.13:16 & Deu.3:21 spellings are validated by Moses in Torah. period
That first one uses five letters while the second one uses six letters.
For thousands of years, Deu.3:21 was recopied thousands of times.  Psalms 12:6
Note that Moses's Torah spelling changed from six letters back to five in Deu.3:28 !
1,000yrs. later, in Neh.8:17, the spelling of Capt. "Joshua" diminishes spelling by Moses.

"YaHUShuA" reflects the intent of Moses,
and declares the most truth, and thereby,
exercises the most profit and authority.
Ok ?

Ok , good.
Abba is not the author of confusion.


But He does like to create much variety, so we must stay alert or be overwhelmed.
(Science says that 80% or 90% of all species ever created are already extinct.)

Notice the Hebrew spelling of "Joshua" in NUM.13:16 then compare it to DEU.3:21.
(One easy way to compare the two spellings is by using an "Interlinear" Bible.)
(Another easy way is by using:   http://www.mechon-mamre.org/p/pt/pt0.htm  )

NUM.13:16 received a letter 'yod'  ;   because Moses enlarged the "hu" with a "yod".
DEU.3:21 received a letter 'waw'  ;   because Moses enlarged the "shua" with a "waw".
Use  Understanding  ; see that both words are the same word.
(That first H#3091 sounds the same as the second H#3091 because of qibbuts !)
Little qibbuts are Vowel Points commonly used to do two things simultaneously.
They substitute here for a real letter "waw" and impose a vowel sound like "uu".
[more later]


More facts: (for you who have the capacity !)


Famous Rabbi Nachmanides "Rambam"
(1135 - 1204) wrote comments about Genesis.
In his introduction he said that any change* in a word or letter
from the usual way of writing it indicates a hidden meaning.
Speaking of hidden meanings, look at the letters which spell
the original name of “Joshua”, before any changes by Moses.
First, notice that in the last syllable of Heb.#1954 you see the
word “shua” which means Salvation.
Second, notice that the "shua" part has a prefix using "hey".

And since “shua”/Salvation has a prefix with “hey”, then "shua"
is already enlarged to:   “BEHOLD” Salvation !, or THE Salvation !
So, even before Moses makes any changes to the original name,
that name already implies something profound (perhaps hidden).

But when Moses did add his "yod" he
definitely “exalted” & changed the name.
Moses did CHANGE* the original spelling
and introduced a hidden (or new) meaning
just like Rabbi Nachmanides (Rambam) said.
It is reasonable to suspect that Moses foresaw
our Savior DEU.18:15; IS.43:11, and foresaw the
role of Joshua to resemble the role of our Saviour,
and was led by the Holy Spirit to honor NUM.6:27.
Moses was led to change the spelling.  Then scripture
advises us to "exalt" and "magnify" and "glorify" the
Name of Elohim Almighty, including YaHUShuA's Name.
The "letter of the Scriptures" contains many deep things
but requires the "love of the Spirit" to discern the intent.
Before you misquote any of this or misunderstand Moses,
you had better think twice !   Discord is hated by YaHUaH.
Prov.6:19b
-and in conclusion:
Hoshea received his name-enlargement from Moses.
The intent of the Holy Spirit is reasonable: use Num.6:27 to spell & honor YaH.
Hundreds of Israelites had names which began or ended with YaHU not Yeh  ! !
Abraham & Sarah & Israel received their enlargement directly from YaHUaH.
YaHUShuA now resembles three other names, known to Moses, using Yahu.
"As for me and my house, we will serve YaHUaH" and infuse His Name !  -and you

In Luke 1:32
Gabriel told Mary
"son of the highest"
yet men want to rob Him
not only of tithes and a worldwide
welcome, but rob Him of His Father's Name.


Careless street people, then and now, refer to
YaHUShuA by some less-noble nickname like Yeshua;
but said angels & Gabriel already knew His rank as "Yahu-" !
It certainly was offensive to many people who tried to silence it.
The Name above all Names had to be more special than common !
His Name was a special Name like John the Baptist’s. Luke 1:13, 61 !
John was "sent from God"(Jn.1:6) and named using the prefix "YAH",
Messiah, 'sent from God'  (Jn.6:57), was named using the prefix "YAH" !
F.Y.I. :  Nine men in Scripture were named "John",    i.e. YAHCHANNAN !!
Dozens & dozens of different names began with "YAH" (some very evil) !
The assigned prefix for “John” was YAH,
(Strong’s Hebrew Dict. Heb.#3076)
The assigned prefix for Capt. “Joshua” was YAH,
(Strong’s Hebrew Dict. Heb.#3091)
Easy correlations: "Joel" means "Yah is El".
"Joshua means "Yah is Salvation".
Even an earthly High Priest in Zechariah used that "Yah" prefix.

The Son of YaHUaH deserved the prefix YAH more than anyone !
Contrary men will deny that just like they deny Creationism.

Few people on earth will declare YaHUShuA.
Do you really want to rob Him of that too (like the tithe) ?
We pray your Spirit Component can overpower your other two
Components (body & mind) (for righteous growth here);
-THAT is real violence.
And to love & declare YaHUShuA is about the most violent.
Matt.11:12 ; Zech. 3:2 !Wisdom & Knowledge & Understanding
should be able to show you that the word Hoshea was enlarged.
It is enlarged from "The Salvation" to "Yahu Who is Salvation" !
The "highest & best" or most "exalted" result is YAHU - SHUA !
Twenty-seven different Bible Names use Yahu in their prefix.
Seventy-two different Bible names use Yahu in their suffix.
Those ninety-nine names are used & re-used by 396 folks !

Looking back, it is a grief to see how we poured out love & gifts
to certain Religious Authorities for years
but when we finally learned YaHUaH's Name and told them,
their friendliness changed to 'virtually estranged',
and we lost all those "investments" in them.
One nice thing was that those pains explained & confirmed Matt.7:6a !
Woe unto them that obstructed the intent of  John 17:26  &  Mark 16:17b.

Matt.26:64
Jesus saith unto him, Thou hast said: nevertheless I say unto you, Hereafter shall ye see the Son of man sitting on the right hand of power, and coming in the clouds of heaven.

Mark 13:26
And then shall they see the Son of man coming in the clouds with great power and glory.

Mark 14:62
And Jesus said, I am: and ye shall see the Son of man sitting on the right hand of power, and coming in the clouds of heaven.

Lu.21:27
And then shall they see the Son of man coming in a cloud with power and great glory.

Acts 1:9
And when he had spoken these things, while they beheld, he was taken up; and a cloud received him out of their sight.

Lu.24:51
And it came to pass, while he blessed them, he was parted from them, and carried up into heaven.

2 Thess.1:7
And to you who are troubled rest with us, when the Lord Jesus shall berevealed from heaven with his mighty angels,

Dan.7:13,14
I saw in the night visions, and, behold, one like the Son of man came with the clouds of heaven, and came to the Ancient of days, and they brought him near before him.

14And there was given him dominion, and glory, and a kingdom, that all people, nations, and languages, should serve him: his dominion is an everlasting dominion, which shall not pass away, and his kingdom that which shall not be destroyed.

1 Thess.4:17
Then we which are alive and remain shall be caught up together with them in the clouds, to meet the Lord in the air: and so shall we ever be with the Lord.

Rev.1:7
Behold, he cometh with clouds; and every eye shall see him, and they also which pierced him: and all kindreds of the earth shall wail because of him. Even so, Amen.

Jud.1:14 ;  [Zec.14:5c,9]
And Enoch also, the seventh from Adam, prophesied of these, saying, Behold, the Lord cometh with ten thousands of his saints,

For it had been better for them
not to have known the way of righteousness,
than, after they have known it,
to turn from the holy commandment
delivered unto them.

This explanation by YaHUShUA
does nullify some "deathbed" initiatives
by some dying patients, since the invitation
belongs to the Holy Spirit. 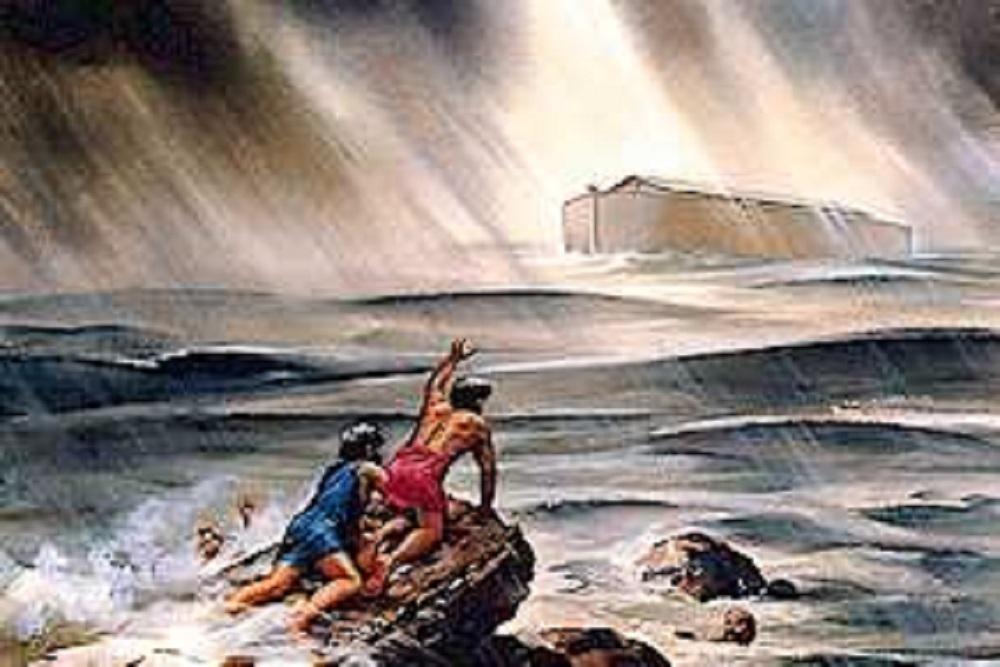 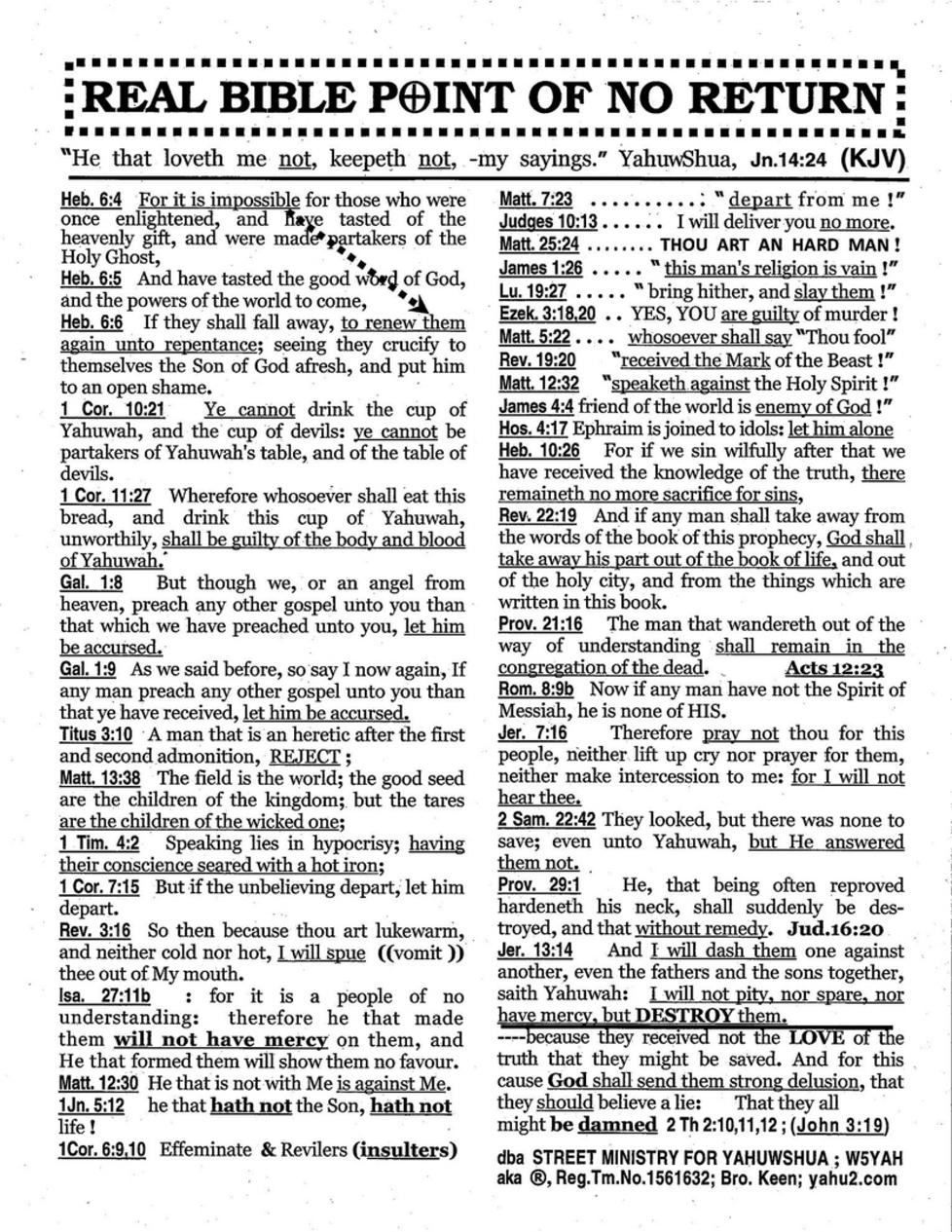